https://www.youtube.com/watch?v=kl0J6Le5MpM&feature=youtu.be
This video by Neil deGrasse Tyson is so amazing and uplifting, I just had to share it for you to watch too. It’s actually called The Most Astounding Fact but I added in Amazing because I think it is and it became The Most Amazing Astounding Fact.

The most amazing astounding fact is the knowledge that the atoms that comprise life on Earth, the atoms that make up the human body are traceable to the crucibles.

That cooked light elements into heavy elements in their core under extreme temperatures and pressures. These stars, the high mass ones among them, went unstable in their later years. They collapsed and then exploded scattering their enriched inner core across the galaxy guts made of carbon, nitrogen, oxygen and all the basic fundamental ingredients of life itself.

These ingredients become part of gas clouds that condense then collapse to form the next generation of solar systems, stars with orbiting planets and those planets now have the ingredients for life itself, So that when I look up at the night sky – and I know that yes, we are part of this universe, we are in this universe, but perhaps more important than both of those facts is that the universe is in us.

When I reflect on that fact, I look up. Many people feel small because they’re small in the universe is big, but I feel big because my atoms came from those stars. There’s a level of connectivity that’s, really what you want in life.

You want to feel connected want to feel relevant but feel like a participant in the goings-on of the activities and events around you. that’s precisely what we are just by being alive.

This is so true, something I already know but it is good to be reminded of it every so often. The universe is part of us as we are part of it.

Those of us on an awakened path already know that everything is connected.

That we are all made of atoms, hence the interconnectedness.

I find that seeing and listening to this video very uplifting and energising.  For me it has the power of transformation.

Have you listened to it and watched it?  What did you think?

What is the Universe?

Do you stand outside at night and look at the stars? How does it make you feel? 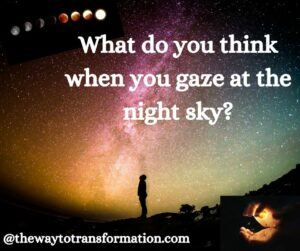 I find that any worries or concerns I might have seem insignificant against this backdrop that has existed for millenia. It makes me ask myself if that concern is important, will it matter in 6 months or a year? It just seems to encourage me to put things into perspective.

I can’t talk about the night sky without mentioning the moon. The moon has an affect on people and some are affected adversely, it affects their mood one way or another and can be quite severe. More recently scientists have said that the waxing moon has an affect on many people’s sleeping pattern. In that lead up to the full moon sleep can be disrupted, which of course is not good.

On the plus side as the full moon begins to wane, good sleep is usually restored.

I do love to see the full moon, I find that very uplifting too. Sometimes my sleep is disturbed as it waxes, not always but I always notice how many people will say they haven’t slept well for a few days. Often they are unaware whether the moon is there or not.

I have an office in my garden so I notice it more than most. I also have a weather station indoors that shows the phases of the moon. I check it often in passing.

Does the moon affect you?

This post is a bit different but having discovered the video I felt the need to share it so more people would get to see it.

If it affected you in any way, please let me know in the comments. Did you like it?

Would you like to see more posts with videos?

If you enjoyed this post, please share so others can enjoy it too. Comments and questions are welcome.

Sign up for occasional updates on posts & self help products and receive a FREE Ebook. ‘The Self-Esteem Workbook’

As an Amazon Associate I earn from qualifying purchases.

I can also earn from other companies I am affiliated with.